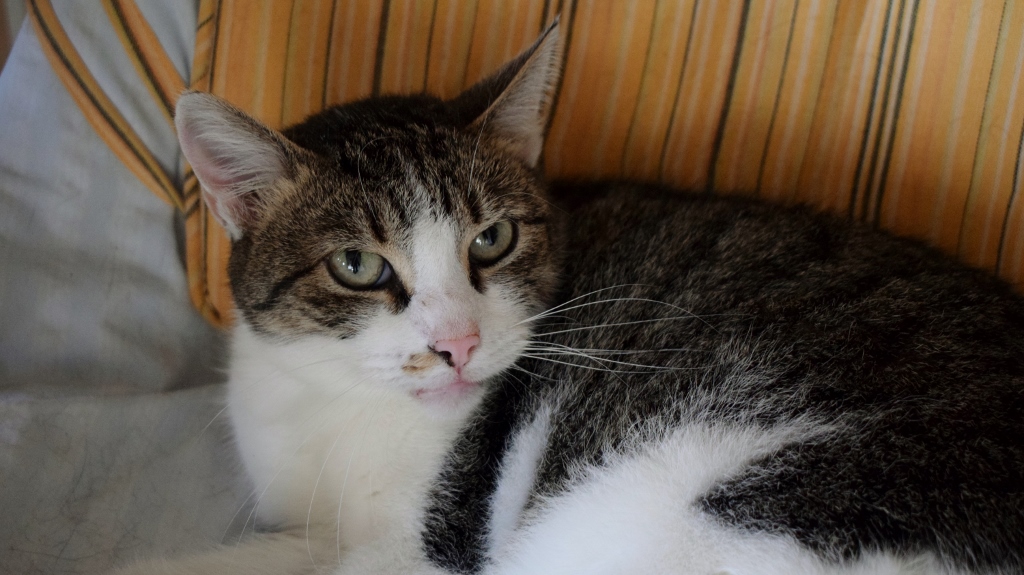 Kim was definitely the wildest of three brothers saved from the streets in the autumn of 2013. Her sister Rachel and brother Robbie were adopted in Holland, but she stayed.

During the first weeks, there was no way you could get close to her, especially if she was hiding in a basket. She would slap and hiss, make strange sounds, anything just to get you away from her. When she got sick, it was only with sleeves pulled all the way down on our hands that we could catch and treat her. Things got better in time and she became friendlier. Unfortunately, her bronchitis came back again, and again, until no medicine worked anymore and it became chronic.

It’s been such a long time that Kim is in the shelter! We have learnt that she likes melted cheese and she accepts it in a bowl or on your finger with much joy. We saw she is longing for human touch and we try to cuddle her every time she lets us. And when she hides… well, we always find her just by listening where the heavy breathing comes from.

Despite her bronchitis and her shyness, Kim is a sweet cat, who needs to trust people before letting them get close. She would need much time to adapt to a new environment, much love and understanding, but it wouldn’t be impossible. Maybe one day she will be lucky enough to be noticed by someone who loves cats to the moon and back, who is not bothered by her breathing, who likes challenges and who would open their heart and home to her. Making such a cat trust you with her life, leave aside her fears, that is both a great accomplishment and the best reward one could ever get. Especially knowing how much she actually likes cuddling, once she gets to trust you.